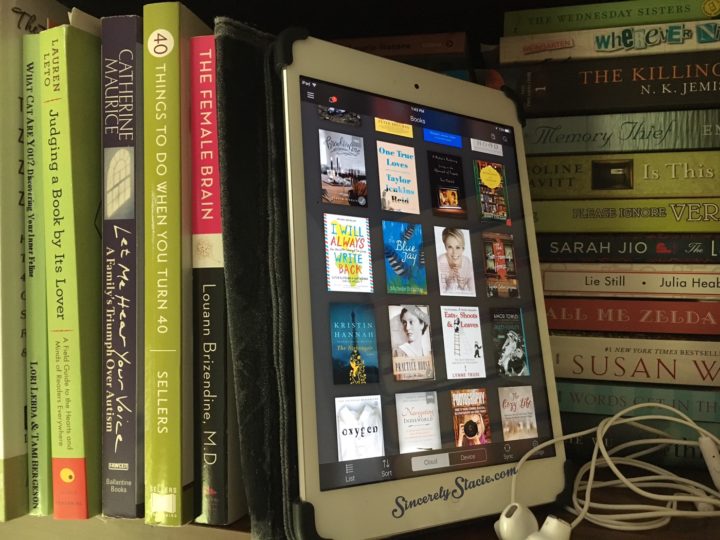 Quick Lit: Mini-Reviews of the Books I Read in the last 30 days

I’m trying to read more books that I choose for my own reading enjoyment. Not for review, but because I’ve been wanting to read them or they caught my attention. Most of them have been talked about ad nauseam or have been on my to-read list for a long time so they don’t really need a full review. But, I’d still like to give them some space here on the blog, so instead, I’m offering mini-reviews of the books that won’t get full-page space here.
I’ll be linking up with Modern Mrs. Darcy and her monthly Quick Lit link up. Be sure to head over to see others link up their Quick Lit posts.

I can’t even tell you how much this book broke me. I read it over the course of 24 hours which I had no business doing, but I couldn’t put it down. I had to be there with Emma while she grieved, recovered, and grieved again. The synopsis gives you the gist of what happens. There are no surprises when Jesse goes missing, you know it’s coming. But, man, Emma’s grief still seeps off the page and into your heart. When Jesse returns and she has to make a choice between Jesse and Sam, I know you’ll be rooting for one of them and I was so glad she chose the “right one”.

This story has been compared to the movie “Cast Away”, but what’s different is that it is told from Emma’s perspective unlike in “Cast Away”. We have no idea what Jesse is going through, instead, we go through Emma’s emotions and heartbreaking decisions to start over.

I love how the author told the story, her descriptions were exactly what I would expect to be feeling but couldn’t have put them into words. I appreciated how all my questions weren’t answered. They didn’t matter in the big picture. It was one of those books that I started on a whim and am sad that I can’t experience that kind of emotional investment again. It was the right book at the right time.

A Year in Space, A Lifetime of Discovery
By: Scott Kelly
Narrated by: Scott Kelly
Published: October 17, 2017
Publisher: Knopf
Format: Audiobook and eBook through Library Overdrive
I started this on audio through my library’s overdrive system. But, it is quite a long book and the 14-day time limit ran out before I could finish. I only had 3 chapters left so it was so hard to go back on the list and wait. The ebook came up sooner for me so I finished it that way and I am so glad I did because I would have missed lots of pictures otherwise.

I would never have thought that I would be interested in a book about space travel, but after following Commander Kelly on Instagram during his year in space, I became quite interested. I have even been watching as the ISS flies over our home. (You can find the times for your area by googling “ISS flyover”).

This memoir wasn’t just about his year in space and previous space journeys which I found fascinating, but also about his life growing up. He was the last kid you would have expected to join the military, become a Navy pilot, and an astronaut. But, he chose that route all because of a book he read by chance in high school. That one book changed the entire trajectory of his life and that to me is pretty amazing.

His life story and all he endured to become the Commander of the ISS were so inspiring and I learned so much about space travel. The risks the astronauts take every day while flying over us is just mind-boggling. His story is one I highly recommend. The paperback version comes out September 25, 2018.  There is also a Young Readers Edition that is coming out October 16, 2018. Not that kids wouldn’t like his original version, but there are a lot of swear words and technical terminology that may overwhelm young readers.

WHAT I SAW AND HOW I LIED

This book was raved about by Anne Bogel of Modern Mrs. Darcy and Gretchen Rubin, two authors whose opinions I value. So, I decided to see if I could get it through my library and it was available right away. Since it is marked as a young adult, it is a fairly quick read. The story is told after WWII, when businesses begin to boom and families start to reconnect. Evie’s life will make you cringe at times due to the poor choices of her mother and the poor choices Evie makes herself. The lies keep building until it’s hard to tell what’s a truth and what’s a lie. A true page-turner.

A Memoir of a Family and a Culture in Crisis
By: J. D. Vance
Narrated by: J.D. Vance
Published: June 28, 2016
Publisher: Harper
Format: Audiobook through Library Overdrive

Well, I have to admit that I listened to this book right after EDUCATED by Tara Westover. It wasn’t planned. It was just how the library holds came up. I may have appreciated this book a bit more if it wasn’t following Tara Westover’s amazing story. Not that the two stories are the same, but they are similar.

I just couldn’t seem to get into this one as much. I was turned off by his constant profanity (which I understand was part of his culture) and I felt like it was more researched based and less personal. When the stories of his life got personal, I was definitely more engaged with the story.

Even though I am far from Appalachia, I am quite familiar with the deep poverty in our rural area of the Midwest. I see many of the situations he described in our own school and it reminded me that kids react due to their environment, not out of spite. His frustrations with education and cycle of abuse and alcoholism were easy to identify with.

It’s a short listen and I appreciated his insights and all that he has accomplished even though he had all kinds of obstacles that would have made it easier to give up. He has an opportunity to share his personal insights and make a difference and I hope he can.